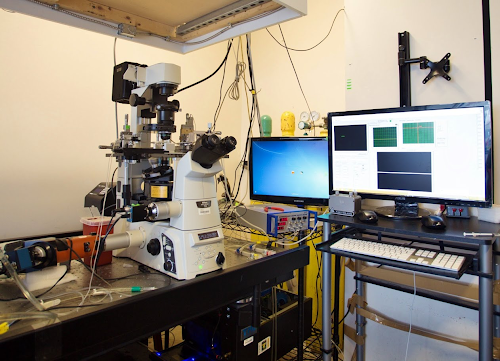 The biomembrane force probe (BFP) experiment mimics the shearing and dragging forces that surface receptors experience during cell rolling. The experiment setup of the BFP is described as follows: a glass bead coated with ligands and streptavidin is attached to the apex of a red blood cell (RBC), which is aspirated by a micro-pipette and acts as a sensitive force transducer. A second micropipette holds a live cell, which expresses surface receptors, and brings it into contact with the bead, allowing binding between the ligand and the receptor under on-axial compression. During the subsequent retraction of the micropipette, the deformation of the RBC gives information about thermal fluctuation, bond lifetime, force (calculated from extension) etc. This instrument is equipped with fluorescence microscopy to simultaneously study intracellular signaling.